We’ve had a fairly busy couple of days with lots of ups and downs (for a change! 😆) but I’m too tired to write a full update tonight. Just wanted to quickly share this… Look who currently has no prongs on his little face and has been in AIR for the last 24 hours 😊 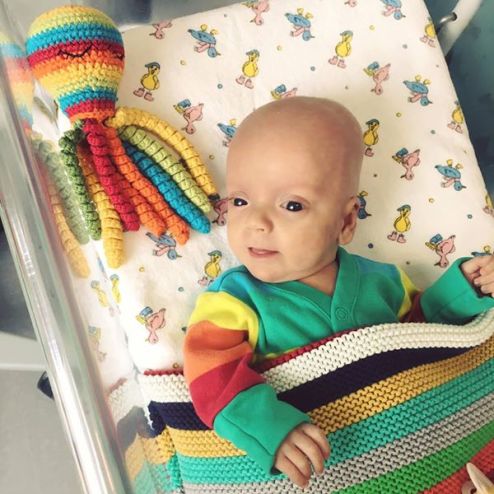 Not a great deal to report in terms of an update. Oxygen still between 0.08 and occasional air. He’s started having the odd desat/brady again, possibly just reflux related so his ranitidine has been adjusted for his weight. Feeds have gone to 4 hourly today so we’ll see how he goes with that. Stoma loss doesn’t seem to have increased so far…

It’s so lovely to have him just down the road now. Today I actually got to do BOTH school runs with my big boys! We went up to the hospital after morning drop off and spent the day there then came home for afternoon pick up then back up to the hospital for a few hours this evening. Its funny how nice it is to just do normal everyday things, I’m sure the novelty will wear off soon! 😂 It’s been hard leaving him every night, especially since I’d been petty much living at the hospital before so was with him constantly, but it is soooo good to sleep in my own bed again!

Arlo was being insanely cute before we left tonight (look at that little face 😍) which made leaving even harder than usual! He’s really starting to show his own little personality now and he loves his food! Only time he ever really makes a fuss is when he’s ready for his dinner, then we all know about it. All that time nil by mouth though, he’s obviously just making up for lost time! 😁

Look at those prongs! Just before I took this photo I’d taken off his tapes that hold his prongs in place and put new ones on all by myself. I’m strangely proud of them 😂 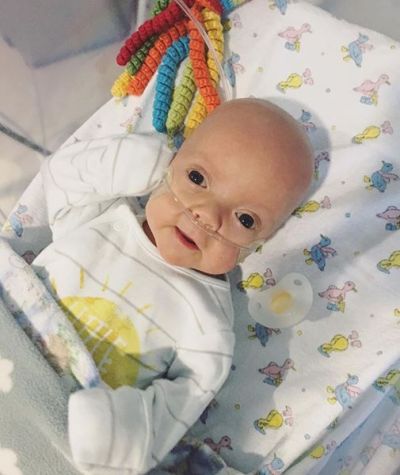 Also, the Drs were very happy with Arlo during ward round this morning so it’s been arranged for us to see the stoma nurse on Monday and the home oxygen team on Tuesday as we are now officially DISCHARGE PLANNING!! 😱

Another good update tonight 😊 Arlo’s settled in really well after his transfer back to Telford yesterday. Transfer itself went well. When we arrived he was in oxygen of 0.07 which is what he’s been in for the last week or so. Well we think he must really like the good old Shropshire air because his oxygen was able to be weaned down quite quickly yesterday and for about half an hour yesterday afternoon he was in AIR! Zero oxygen, breathing fully for himself and saturating beautifully! We couldn’t believe it! No oxygen!

Overnight and today he’s been going between 0.02 oxygen and air! The Drs are hopeful that he may actually be able to come home without oxygen after all which is just amazing for a 25 weeker full stop but even more amazing considering he was on a ventilator for so long and has chronic lung disease.

Also, since last night he’s woken for & taken every feed himself so as of this afternoon, the NG tube has gone! He’s had it taken out and hopefully won’t need one back in. He’s doing really well. Actually he’s doing amazingly. Obviously I’m now super paranoid that something awful is about to happen but trying my best to not think like that. He does have his second lot of immunisations tomorrow though so we do need to prepare ourselves for those setting him back a bit. We’ll see though.

Still can’t believe he’s managing little stretches with no oxygen, and the feeding tube has gone, it’s amazing! Captain Arlo showing off his super baby credentials again, so so proud of him 💛

🎉 Arlo’s all tucked up in his little pod, having a good old munch on his hand, and we’re in the ambulance right now on our way to Telford Neonatal Unit 🙂 Felt very emotional leaving BWH. We’ll never ever be able to thank them enough for everything they’ve done for Arlo & us and we really will miss everyone. Thank you all 💛

Look who FINALLY, at almost 17 weeks old with a corrected gestational age of 41 weeks, made it in to a normal standard cot!

I’m so proud of him, he’s doing brilliantly. He’s doing great at breastfeeds now, it’s such a shame we’re limited to 3 five minutes feeds a day because he’s doing so well at it but hopefully our patience will pay off in the end. He’s doing a little better with bottles now, we have to feed him paced and side lying and when he’s properly awake he’s not too bad. Waiting for SALT to come and review his tongue tie at the moment. Majority of his feeds are still down his ng tube and it’s quite possible he’ll eventually come home with the tube. We’ll see though.

His oxygen is now down to 0.08! He’s still having the odd desat and brady but they’re not as bad as they have been and seem to be reflux related. He’s on ranitidine 3x a day for that and it seems to have helped a little. He still chokes a bit and bradys after most feeds but it’s not as dramatic as it was last week.

His liver is getting better and his levels are coming down, still high and he’s still quite yellow but it’s definitely heading in the right direction.

He really really seems to enjoy being spoken to or read to now. He stares at my face intently as though i’m the most interesting person in the world (poor boy

😂). He’s is very calm and content generally, I suppose when you’ve been poked & prodded as much as he has it must be bliss to just be left alone! Oh, and we’ve had yet another room move! We’re now in Grasshopper aka, the very last room before the H word..!

Today we’ve moved room again. We’re now in Bumblebee. Obviously he’s still technically in isolation because of the serratia but as far as I know this means he’s now in special care! Woohoo!

When I last updated I mentioned we were waiting for stool sample results and we got those back Monday. They showed his absorption is slightly better. Still plus 2 fats (was plus 3 before) but any improvement is better than none at all. We then spoke to one of the surgeons and he explained that it won’t be possible for Arlo to go to Telford because he needs to be where the surgical team are really, it’s the best place for him to be, and that’s the most important thing.

We spoke to the dietitian and surgical nurse today and we have a bit of a plan now (subject to change, this is Arlo after all!). In a nutshell, they’re really pleased with his progress. The fact that he’s on full feeds is brilliant, especially considering the position of his stoma. His tube feeds have now gone up to 40mls 2 hourly (plus his 3 breastfeeds a day) and he’s allowed a slightly higher stoma output now (30mls per kilo, per day) so we’ll see how he goes with that.

His liver function is getting better, slowly. As it continues to improve that’ll help with fat absorption and we can then start to add more breastfeeds in. They’d like to now start offering some of the tube feeds with a bottle. I feel a bit wibbly about this because I’ve worked so hard pumping for the last 4 months and my long term goal is to get him exclusively breastfeeding so I’m worried about nipple confusion but it’s highly likely he’ll need his special milk for a while yet and obviously it’d be much better and more comfortable for him if he could have it via a bottle rather than down a tube. I’ll still be feeding him too though and we’ll be doing paced feeding too so that should help.

As things stand right now and please please bear in mind things can (and regularly do!) change at a moments notice, the long term goal is to get his feeds sorted and get him gaining weight, and eventually discharge to the H word that we dare not even say out loud with stoma reversal at a later date! Obviously we’re not talking imminently, he still has a way to go yet, and lots of things could throw a spanner in the works but that’s what we’re aiming for longer term.

We thought he’d have to have his reversal surgery before discharge could be considered, and that might still end up being the case, but for now we’re aiming to go H word first. We’ll see…

😄 He loved it, went straight to sleep but woke up as soon as it stopped swaying!

There was an error retrieving images from Instagram. An attempt will be remade in a few minutes.

The Adventures of Arlo River
Powered by WordPress.com.